First Snow Of The Season aka Snow Day Musings 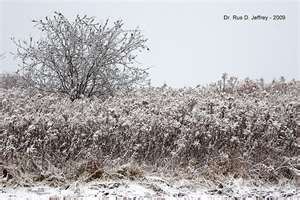 The above photo comes from the site of Dr Rus D. Jeffrey, a professional photographer
Please look at his site which can be found at http://drrusphotography.godlaughs.net/

While there check out all the wonderful photography he has on the site. One of the ones I particularly liked was of a half eaten apple on the ground with a hornet or something on it. Beautiful.
Do consider purchasing some of Dr. Jeffrey's works if you appreciate this photo.
Remember, if you want to use any of Dr. Jeffrey's art to contact him as they are, of course, copyrighted materials.
This picture quite accurately portrays what I and other Edmontonians woke up to today. While the picture is a beautiful one, despite it's accuracy, the real scene struck me as more sad than beautiful. November 12th and already it's "unofficially officially" winter. The first snow of the season. Couldn't it have waited. Like perhaps until New Year's Eve, like it did one halycon year a number of years back (the late 90's/early 00's I think). I guess that kind of luck probably comes around like "Brigadoon". Once every hundred years. A soon-to-be frost-bitten Canadian girl can dream though, can't she.
Today I was supposed to go to my mom's for the rest of the weekend (a day and a half basically) after finishing up this blog. Of course I waited till the last moment. Also, with the snow, even though I knew a light dusting of snow didn't necessarily mean sub-zero temperatures it bummed me out enough to cancel on that basis as well. All I know is aside from getting my blogs done earlier on a consistent basis for the rest of the month, I better learn pretty damn quick to "put on my big girl panties" and suck it up. Winter is coming.
So, what did I spend the day doing. Well, mostly looking on-line news and other people's blogs as well as spending some time in the blogger coffee shop forum. If nothing else, I should have some fodder for blogging. One thing that is going to make it increasingly hard however, if I don't manage my time better, is finding picture pairings like I'd like to have for more rather than less of my remaining November NaBloPoMo posts. I have plenty of pictures but it does take some time to pair them up or find single ones that somewhat segue from immediately or close to it posts as I also like to do.
I may also have to spend some time looking for even more pictures to fit the some of the news that I may like to lead off with in my next few posts. One is animal related so it fits that way with a lot of the comical animal pictures recently posted. It is different though, because it is a story rather than an extended caption and comments and because it is a serious one (if not a bit wacky depending on your views) needs some more thought put into it. I think when you read it you will find it interesting. I won't say enjoy as it is not that kind of story neccessarily. Well, you'll see what I mean when I post it. Of course, comments are always encouraged.
Finally, I went to take my own picture this morning with my cheap but functional kid's digital camera only to find that the screen had broken and it would not work at all. I had, at last gotten to the point of being willing to take pictures of my own and ask staff to help upload it now that I know how to actually put the picture on the blog once it would actually be put on the computer for me. Alas, it was not meant to be. Now I have to look for another, almost 100% likely more expensive digital camera (the old one cost $10!).
I will probably try FreeCycle. Obviously there are no guarantees there. Oh, and although I started the last paragraph with the foreshadowing word finally, I do have one more thing to say related to taking pictures as opposed to saving them from the internet & figuring out/actually getting around to doing simple computer tasks I always thought to be difficult. I made my first video, from my webcam, and posted it to YouTube. It was just a silly little "this is a test" type thing of just over a minute but, finally, I have content on my channel.
Carmen
﻿
P.S. Which title do you like better - "First Snow Of The Season" or "Snow Day Musings". I guess I'll have to pick one before posting but if I get feedback that the other one is preferred I will probably change it. Titles are, and have always been, important to me. Enough so that I was pleased that a real life friend who also reads this blog once told me, unbidden, that I always seemed to have such good titles. That day I sure felt that my mild obsession with the perfect title was justified. And appreciated. A good day indeed.
The C.A.T.
P.P.S. As you can see I hedged my bets. LOL. And it's staying that way! Comments still welcome of course, they just will be for interest only.
P.P.P.S. Remember to check out - http://drrusphotography.godlaughs.net/