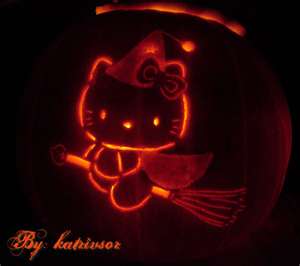 This is my first time adding a picture here. It comes from http://www.nicekittyworld.com/
Happy Halloween.
See you tomorrow for the start of NaBloPoMo (which is also NaNoWriMo)
Posted by CarmenT at 10:31 PM 2 comments:

Not exactly earth-shattering news in many quarters, I must tell you my day was made today when I came across a sign atop of the building that houses my favorite burrito restaurant - Burrito Libre. In point of fact, I've never been to other places like Mucho Burrito or Taco del Mar but I still call Burrito Libre my favorite because if you find something good I say you stick with it. Finding out they do periodic "Free Burrito Day's" only adds to the allure! Yes, it turns out that this is not, in fact, a one time thing. Yay, Burrito Libre management.

Allow me to set the scene... I was coming home from an extremely early morning errand on the other end of town in some God forsaken cresent devil-arc filled neighborhood that ended up being all for naught when a fortuitous change of buses took me directly past Burrito Libre. Now this was a welcome turn of events since I was pretty grouchy about my plans being aborted. After all, I was on the bus by 6:00am (!) only to be thwarted in my attempt to do some quality FreeCycling (more on that later). By the way, google Freecycling. You'll be glad you did!

So anyway, I originally decided to get a burrito not knowing anything about the free aspect. It was just upon getting close enough to see the banner that I realized my good fortune of chancing on to picking the exact right time to both have had the return trip take me past and then chosen to indulge in a trip there. One thing that could have kiboshed the deal was the fact that it was still so early in the morning that it turned out the restaurant didn't open for another 45 minutes. Luckily there is a Tim Hortons a block away that was open (Also luckily too it had just opened 15 minutes before. LOL).

So I killed some time there with no worries of being noticed loitering around since they were so incredibly busy. I waited until almost exactly before opening to leave to make the one block walk back only to find that the line of other burrito lovers (or freebie lovers ... or both - lol) was out the door and curving around the side of the building. LOL. Lucky thing they had about 5 staff working behind the counter in that small store. It only took about a half an hour to get to the front of the line. So if you ever see a big line in front of a location don't assume it isn't worth sticking around for.

Naturally, the day was in support of a good cause. In this case the campus (it's by the University of Alberta which is where my bus connection took me) Food Bank. Because I just chanced on it and hadn't read about the event I didn't have a donation of food but they were also taking small donations to the Salvation Army as they had a kettle there. It's nice to see that they are supporting the area in which they do business by primarily supporting the campus Food Bank. That (the University Food Bank) is a story worth telling on another day.

One thing to note if you should ever happen to hear about one of these Free Burrito Days through the radio, tv, social or print media is that while they are open till 11:00pm on normal business days they are only open until 8:00pm on Free Burrito Days. I know this only because I was going to head back for dinner there (a second trip) because I had other plans in the area later in the day but by the time I returned it was already closed for the day. Thankfully, so as not to leave people wondering, they had a sign that explained the difference in hours.

P.S. Aside from a grouch reduction therapy standpoint, chancing upon this could also be considered a belated birthday gift since my birthday was a week ago to the day. Happy Belated Bday to me! LOL.

P.P.S. This post could be considered a companion piece to my previous Free Slurpee Day post only with happier results. :)