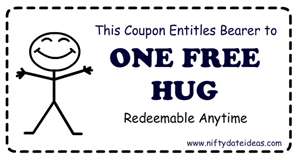 So, yesterday as I was in my edit feature I chanced upon a revelation. I had kept track of my 50th, 100th and 150th Posts but almost missed the 200th.
What do I have for you on this momentous occasion. Well, I thought that I would offer a continuation of sorts from yesterday's post on commenting. Hence the Hug Coupon. Remember, "Comments Are The New Hugs". LOL.
So either way feel free to use these to share the blog love and otherwise with your's truly and your other deserving internet peeps.
Oh, and just to "mix things up a bit" I'll keep this post as one of my occasional "short and sweet" ones.
Carmen
P.S. You just knew I was gonna ruin "short and sweet" with a long p.s., didn't you? LOL. 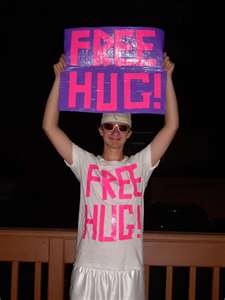 I almost forgot, on the subject of hugs, there is also a group through which I got this on Yahoo Images - http://www.freehugscampaign.org/ that I actually personally encountered once and once saw from a distance, in Edmonton a number of years ago.
Above is not one of them as obviously it is "home made" but the site sells t-shirts promoting their cause. They also have a nice, heartwarming little blurb on ﻿how it first came about. 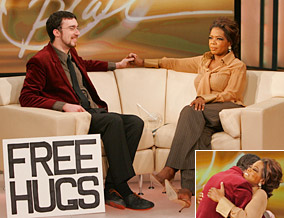 Finally, we have a more tasteful picture I found while visiting their site to check the link. It's also a "more official" photo since, even though I am not her biggest fan, I think we all know that being on "Oprah" when it was still on really meant you had arrived.
That and the founder is wearing a suit with a shirt that doesn't involve pink duct tape. That adds to the tasteful factor just a bit too. LOL. Although, I'd say, "in the trenches", that is on the street where the hugs are typically provided that (the "low brow" version) is more in keeping  with the spirit of the movement. Kind of like the Food Not Bombs types. A lovably scruffy, rag-tag group.
So be on the look out, or go to the site and plan your own free hug day (it needs planning to avoid the police sometimes) and have a wonderful, "hugalious" day.
The C.A.T.﻿

P.P.S. The expansion continues. LOL. I was just checking my files again and noticed before posting but not before signing off - see just above - that in fact this isn't techically my 200th post. Or more to the point, it is technically but not exactly if you want to think about it that way, my 200th post.

You see I have several old draft posts left in from last summer or somewhere around there kicking around. I guess they count in the total.

So this is what I'm going to do. Call it a compromise. Since I'm nothing if not a reasonable person. LOL. I am going to continue to call this my 200th post even though I am not going to besmirch the sanctity of my one a day for the month of November (and the insuing scramble for about three seven posts worth of pictures).

So, where's the compromise. Well, here it is. I am going to go back, after NaBloPoMo and do some backdating to the times of the original drafts inceptions. That is the best I can do. Deal with it. LOL.