I Actually Am Surprised ... and Sad! 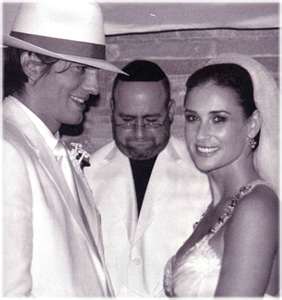 This is of course the wedding picture of Ashton Kutcher & Demi Moore. It came from Yahoo Images via http://www.forum.purseblog.com/
Oddly enough, a site called purseblog that does, in fact deal pretty much with, you guessed it, purses has on the forum part, a celebrity section near the bottom if you check out the site in curiousity that this photo was found there of all places.﻿
Anyway...
Despite the ridiculous hat he is wearing and the fact that she is wearing a veil (and a long one from the looks of it at that) I look at this picture and I don't see a bogus marriage like some are now claiming on the heels of Demi Moore's announcement that she is divorcing her much younger second third husband Ashton Kutcher.
I find it all pretty sad.
For months now there have been rumors, and those rumors were at least tacitly denied while they presumably worked on trying to salvage their six-year marriage.
In case you are inclined to agree with those who believe the marriage was a sham or at the very least doomed destined to fail I will point this out... Moore's first marriage to Bruce Willis, which produced three daughters, lasted only about twice as long at thirteen years.
So, even though six years is a short time, it's not that short.
I guess I can't really logically explain why I find this so very sad other than that it helped validate the choice of woman (& their partners too I guess) to date and marry younger men much like men have dated and married younger women for ions.
So, failing to come up with a reason better than the above, I will let a few pictures speak for themselves and show two people who looked pretty happy together to me. 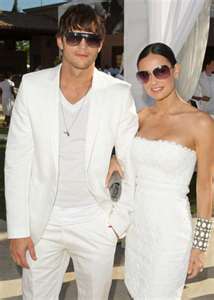 Looking good in what might have been a more appropriate use of white for a wedding like theirs. Him minus the dopey hat and formal suit and her in a less first wedding type outfit.
The above picture taken at music mogul Sean Coombs 4th of July party (he and presumably all the other guests wore white too) was found at Yahoo Images via http://www.fashionfarai.wordpress.com/ 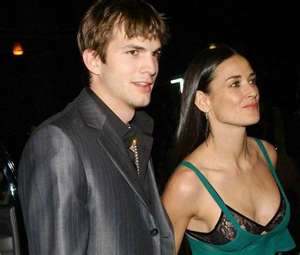 ﻿This photo from Yahoo Images via http://www.accessmaratoday.com/ while a bit of a fashion disaster on her part (he looks pretty good - it wouldn't have hurt her to have classed it up a bit) also shows them looking seemingly pretty happy
Oh, well. You never can tell. Look at Susan Sarandon and Tim Robbins. They too were sort of May/December. Although they never married, they were together almost 25 years and then woosh it was over.
One celebrity couple, albeit not so famous, that is also May/December with an older woman/younger man combo and that did marry (and even had a child together!) and is still together after 20 or 30 years is Juliet Mills (of the Mills acting family and of late the defunct soap Passions) and Maxwell Caulfield (of Dynasty and the Michelle Pfeiffer version of Grease). Long may they last.
Carmen
Posted by CarmenT at 11:45 PM