The Finer "Points" Of Reproduction

Hello. Today's picture follows along the lines of the one from two days ago. I would have used them on back to ﻿back days if I had this one yesterday but I just found it after my again last minute posting. 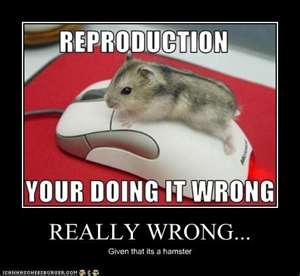 Isn't this priceless. I won't say I laughed out loud when I saw this but that was only because it was late and I had been saving a bunch of pictures so I guess I was "burnt-out" and not properly appreciative - cause this is not only extremely funny it is also extremely cute.
In the so-called (read the very bottom) hamster's defense (I still think it's a mouse) - it is another mouse!
Moving on, as far as my posting for NaBloPoMo yesterday. I did it again. Even though I thought I would get it posted to the BlogHer site on time I missed it again. This time by one minute. It was 12:00am when my first copy went through. I say first copy because there were other problems besides the ones that cost me a crucial minute or two in posting.
When I finally got the block of text here to copy for pasting (it usually doesn't work on my computer the first time or three) I hurriedly pasted it in and hit save (the post feature there) and got an error message because I was in such a hurry I forgot the title and it won't save without a title. If it would have saved it as "Untitled" I might have got it in under the wire and then have been able to go back and edit in a title.
Which would have been better. As I've said before, and I'm sticking with it, as long as I've posted before midnight here on the original blog I think it still counts for me to say I've posted on time every day like the rules say﻿. It's just that I still would like it to be posted properly on time before midnight there too. When I say properly I mean on time not correct without revisions because I also think it's ok to have the post mostly correct and posted and then go back and make edits - even fairly big ones like the title.
I guess maybe that's just the self-justification of a procrastinator caught up in the consequences of her procrastination. Still, better I do this clinging to technicalities and get the benefit of the contest's emphasis on posting regularly than not at all, I think. More self-justification. LOL. You be the judge. Anyway, like I was mentioning earlier on that 12:00 posting was but the first posting of the same thing. My other technical difficulty that I was talking about was that when I did get the title in and hit save it didn't seem to want to save
So I had to hit save again. Then when I looked at my profile page it had it posted twice. %*$#@. What's worse was that there doesn't seem to be any way of deleting posts - editing yes, but deleting no - on that website. Or if there is I haven't found it and I sure did try. Well that's my sad tale of woe re: NaBlo... Today it is now 9:25pm so, fingers crossed, I really don't know how I am going to screw this up again tonight. But if there's a way... LOL.
While I bore you with my endless, nightly self-recriminations about something that I say doesn't matter technically anyway, I might as well pass along a quote I came across that is very appropriate considering.I can't quote it directly, or even attribute it at all, because I can't find it where I thought it was written. So here goes from memory.
"Just because you screwed up doesn't mean I'm here to fix your emergencies". That may sound lame but the true quote was similar but much better. It doesn't apply totally, since no one need fix anything for me (except maybe teach me how to delete at BlogHer if it's even possible) but it does speak to the responsibility issue.  Since I'm not especially known for my stellar sense of personal responsibility though I won't dwell on it LOL
Carmen
P.S. I'm finishing this at, as of now, 9:39pm so while I'm safe at BlogHer barring a major technical snafu that won't let me post at all I am cutting it close for the last bus from right in front of my home as I'm off to Mom's house for what's left of the weekend (I usually leave Thursday).
I'm always behind for something and I thought I had gotten better. Sigh. Well it's now 9:43pm - LOL - so I'm off to BlogHer and then the bus, "God" willing. See you again tomorrow. Again it most likely will be a picture or a series of pictures "headlining" the post.
The C.A.T. (9:45)
Posted by CarmenT at 9:46 PM