Today is the third day for posting a food-related photo duo. The subject today is that well loved All-American ﻿Canadian food - Pizza!

As with yesterday, the two items I will show you come from http://thisiswhyi'mbroke.com/
Unlike yesterday, neither one of them is in any way disgusting. LOL. In fact, both items are, in my opinion, ingenious. I'll let you be the judge of that however. 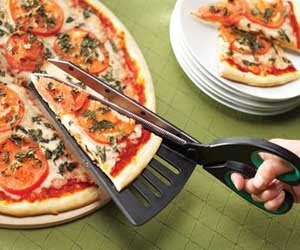 This first item is a dual use utensil as you can see. Both a pair of food scissors to cut the pizza in a jiffy and a attached spatula to scoop it up directly on to your plate. Pretty cool, huh.

The scissors look quite sturdy, the spatula I'm less sure about but I guess it would be made out of the same material as the handle of the scissors so maybe it's nothing to worry about. In any case, it would be an amusing implement to pull out at your next pizza party. 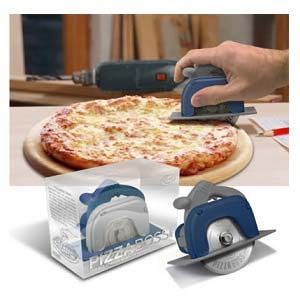 This second piece of kitchen equipment is even cooler. Much, much cooler to be honest. Just take a look at this baby! I shouldn't even have to tell you what it is. But I will. Because after seeing it, I'm sure you don't believe it. Yes, that's right. Someone has actually created a mini pizza-cutting circular saw. A real circular saw. While it is clearly labeled on the box as being for pizza, I'm sure you could find another food cutting use or two out of it.
﻿Pictures out of the way, I'd like to move on to the topic of computer functions which have I've recently learned to us and their value to using my computer for blogging as well as otherwise. I want to brag about my epic accomplishments learning to do the simple things that most people probably figured out were easy to do five minutes after buying their computers. LOL. I'm still proud of myself though. Everytime I figure out that something is easier than I thought and I add/change something I feel like I've conquered the world. LOL So then here are a few new computer accomplishments to share. As I probably mentioned on my Halloween post or shortly after, I am now able to add pictures as you have been seeing and will continue to see for all of November if all goes according to plan. What I didn't tell you is that it all started with my finding out indirectly, at school where I've just started as of a little over month and a half ago, that adding a background to my computer was also easier than I thought. The background I chose is gorgeous. To save pictures so I don't run out of photo topics for the whole month and because I like each post to be about a one picture or a related set of picture I will save it for another post but the screensaver I chose is of the cute animal variety that includes a very nice background that adds added interest to the picture. I know that when you see it you will love it and perhaps even want it for yourselves if only as a saved picture.
First it was saving pictures to my computer six plus months ago, then it was the background wallpaper about a week or so ago, then the blog picture posting a day or so later that took advantange of the picture saving knowledge and around the same time as the recent discoveries I mentioned there was also finally taking off the default screen-saver and adding a cool Aurora Borellis one. I tried the bubbles one but unfortunately it left whatever was on your screen behind it which was a two-fold fail. First, it didn't look as good as having a neutral, matching blue or black background like the Aurora Borellis. Second, all the bubbles were quite big (about the size of a golf ball) and of a uniform size. Not as attractive as it should have been. Not at all. The final thing I want to point out finding was a feature that I don't know if many people know about because it may not be considered very important by most when they hear about it but that I find very useful. It's a cursor finding mechanism. It comes in very handy because I can't count the number of times I've used words I don't like to use in public when I've lost sight of where my cursor is and then have a hard time finding it. Typical ^%*#$ moment. Well, this feature lets you set your computer to have a circular outline pop up around the cursor and then quickly, for lack of a better word, collapse around it by getting to be a slightly smaller circle in the space of a few seconds simply by hitting the control key.
So I think I've exhausted sharing all my new discoveries with you. If there are any of you out there who are as timid about trying new things with your computer, I urge you to take a chance or two experimenting with finding out new features. It's well worth it. If nothing else, and this goes even for others who aren't so timid but probably didn't know about the cursor thing, try using the cursor finding feature. You can find it under Control Panel > Appearance and Personalization > Personalization>Mouse Pointers and then check the enable pointer shadow box at the bottom of the mouse pointer page.
Carmen
Posted by CarmenT at 10:45 AM