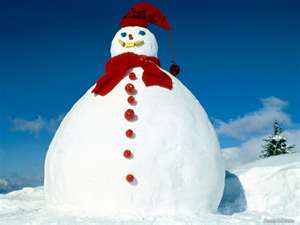 Ok, so there wasn't this %*$^# much snow after only three days. But being out in it also wasn't as fun as seeing a big giant snowperson ﻿either so I guess the exaggerations cancel each other out. Right! LOL. 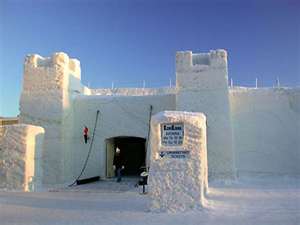 Now here I go ruining things with my cancelling out idea by adding another picture but I couldn't resist.  Just like the enormous snowperson, the gigantic snow fortress (complete with a drawbridge!) also said in a way that wouldn't make me want to slit my wrists (eg. more "fun" than frozen) that it was damn cold for only the second day of having snow.
The first picture is from http://freechristmaswallpapers.org/ or http://freechristmaswallpapers.net/
I say one or the other (and not .com! - it leads to a buyable name page) because at Yahoo Images the location information cut off just before the end of the address. So take your pick. Both locations have some nice stuff. Check them out.﻿
The second picture is from http://playcloths.com/ (don't ask me, I just type it in like it says - lol).
So, today I went out to Toastmasters and gave a speech - my second of the first manual. I'll be talking about that more tomorrow as I'm not really into doing much this post. I blame the snow. Yeah, that's it. Also, I want to make it it's own post. Other than that not much happened today. School was cancelled again today (Monday) just like it was Friday. Friday was, of course, for Remembrance Day and today was PD Day or something.
I'm surprised they have PD Day (I'm pretty sure that's what they called it when they told us about it) because it's just one teacher and an assistant in an upgrading high school for adults in the mental health system.﻿ Anyway, that's what it was. Just like with Toastmasters, I have some stuff to tell you about school that will have to wait to another day. With that, it will be a bit (a fair bit?) longer till I get to that because what I want to talk about in this case hasn't quite happened yet but should pretty soon. I'll keep you posted.
Finally, in the "you'd really have to be interested in my life to care about this" department, supper wasn't bad considering it consisted of three out of three things I don't really like at all! How does something like that happen. LOL. We had some sort of pork that was sitting in a nice sauce that covered the taste of pork - that and the fact that I ate only the tiniest piece. Then there was rice. But it was brown rice and there was the sauce too so that explains that. Finally, we had brussel sprouts. Used to like. Not anymore. But had two. Didn't die.
So that, along with reading something funny that will also be shared another day, was my day. Out of curiousity, I'd be interested to know what any readers I might still have did today. Also, where are you from? I ask because I'm wondering if you had to deal with crappy weather today too. If so, what do you plan to do to survive the long winter coming up? As for me, I don't have a clue. Cry everyday? That's definitely an option right now. The future looks so bleak. Ok, now I'm just being melodramatic. But it is true too. Sad to say.
Carmen
Posted by CarmenT at 10:12 PM