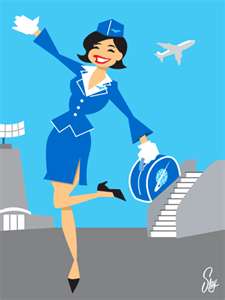 For whatever reason, I'm super tired so just a quick post tonight.
The above photo is from Yahoo Images via http://www.oopshi.nl/. If you check out the link then know that the site is in Dutch. There is a Google Translate feature present on the site though.
Today, I will briefly talk about not one but two plane related incidents that I heard about the other day at the same time. The first one was about a pilot who left the cockpit to go to the bathroom and got himself locked in the toilet. He alerted a passenger, who just happened to have a thick, foreign (presumably Middle Eastern) accent. He gave the guy the cabin code and told him to tell the co-pilot.
The co-pilot was having none of it and radioed in to control assuming the worst. Turns out that the flight was minutes away from an escort into their landing, which they were about to make, from fighter jets.
Ethnic profiling or a reasonable precaution?
The second airplane related story is much more disturbing than a simple accident and the insuing drama. Seems a flight from India to Britian was highjacked - by the airline employees themselves.
Yep. Turns out that getting the passengers fares wasn't enough. While in route, they hit them up for "gas money" - that's right, gas money! before they would go any further.
The passengers were left to search ﻿scrounge around for aproximately $30,000 between them in cash before the flight took off again. Unbelievable, right? What is more unbelievable is that apparently this is not the first time this has happened. Huh?
This time though, the airline appears to be "grounded". For awhile anyways.
Carmen
Posted by CarmenT at 10:56 PM