Isn't This Cute? Oh, And It's My First Original Pictures... 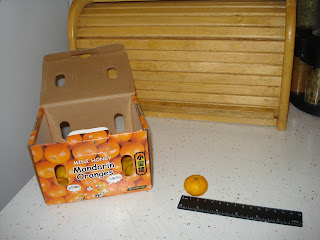 Today I am posting, for the first time, a picture that was while not exactly﻿ taken by myself it is the next best thing. It is not off the internet or borrowed from anywhere or anyone. It was taken by a staff member in the house that I'd like to think of as sort of a friend. I would have taken it myself but I didn't feel right doing that with her camera.
I asked her to bring in her camera and uploading cord because my inexpensive digitial camera got broken like I mentioned on the day I posted Dr. Rus' picture of a first snow in place of one of my own that I was planning to take until I realized my camera had gotten broken when I had it in my purse.
The picture is an almost but not quite perfect representation of the sizes of both the little bitty orange (2cm's wide and probably about as tall) and the cuter than cute little mini box that it came in with 1.5 pounds of little orange goodness. That works out to about 80 "baby" oranges if my estimating skills are correct.
I got the little darlings from my mom who bought the box and gave me twenty of the last ones she had (she kept only two - of course that means she already had about sixty so I guess she had her fill). That is how I estimated there were eighty. The twenty I took filled the bottom of the box basically and I figured that the box held about four rows. I might be wrong though. I'm thinking now that it could have managed five.
Take a look at the picture below and decide for yourselves 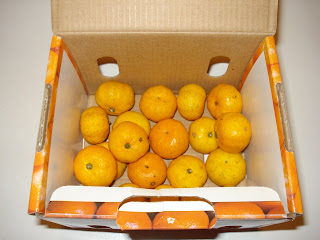 Oh, and aside from the fact that you may or may not have noticed in the first picture that I was totally riffing on the old bigger than (or in this case smaller than) a bread box thing with one of my two reference point items in the picture (the other being of course the ruler) you have to appreciate that the reference points I picked were pretty much perfect. Only two things were wrong with that first picture.
First, the lady who took the picture got it framed almost but not exactly right. There should have been the whole top of the bread box and a little "white space" above it for a perfectly proper reference point in my opinion. It was my fault really though. I didn't notice that. After several poor referencing attempts with a twonie (it caught the light funny) I guess I was too easily impressed with this attempt to notice that that one fine detail was missing from an almost perfect picture.
The second thing wrong was that it could have used a third and final reference point that I put in a separate picture that is immediately below. 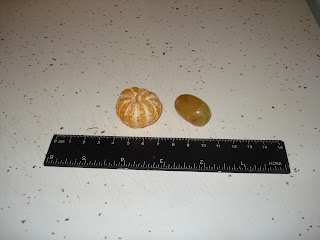 That is, of course, a grape.
And no, it is not a super giant hercules grape.
Now if I were a better photographer/composer of pictures I would have thought of the grape at the same time as the breadbox and ruler. I like to think I have some idea of composition but as this slip up shows I definitely have a ways to go. Regardless, I think me and my "official photographer" Maritess did a pretty reasonable job of "capturing the cuteness".
What do you think?
Carmen
P.S. They aren't just absolutely adorable they taste awesome too. Also, in spite of what my mom says, they aren't that hard to peel. Of course I've peeled like 2 so far where as she peeled 60 to 80 (depending on whether the box held 4 or 5 rows). LOL.
The C.A.T.
Posted by CarmenT at 10:01 PM