So here's today's quota of pictures. Perhaps the title told a little to much of the story but I still think it was the right one. Lays it all on the line. Besides what it didn't tell was how I managed, and so close together, to find two pictures of virtually the same unusual - or what I consider unusual anyway - event. I myself have no idea.
Serendipity? 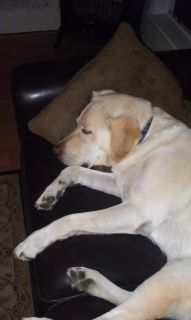 ﻿This is the first photo which I marked as #100 in my list of saved pictures (I told you I'm a picture saving maniac. You would know exactly how much so if you knew just how little time it took to save all those pictures or how many I have now and again in how short a time it took to get them.
Anyway, this picture is the title to a tee. Cute isn't it. He (or she) is really "livin' the life". LOL. 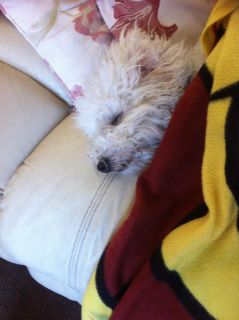 This second picture, which it is hard to tell just now exactly how well it is centered (crosses fingers!) incorporates another piece of bedding in addition to the pillow... A nice cosy blanket. This one is not only "livin' the life" but has moved up in the world a step from his pal in the first picture. But not to worry. There won't be any rivalry. Pal's was stretching it. As far as I know, they don't even know each other. LOL. Besides, I'm sure if the first dogs owner realized they forgot the blanket they'd be appalled at their oversight.
﻿In other news, I just have to mention something very sad but really not surprising happened sometime on Friday. 60 Minutes former correspondent  commentator Andy Rooney just died. As I said, it was not surprising since he was both 92 and in hospital for serious complications from a recent surgery. The worst thing about it is that I'll never get the chance to bother him at dinner (lol) for an autograph - which he always refused to give.
He said in his last 60 minutes commentary about a month ago, when he finally retired, that he hated being bothered by fans, especially while eating dinner. Sorry Mr. Rooney. I loved you, but I would have done it anyway cause prickly (or as everyone else called it - curmudgeonly) as you were you were just so darn cute. I wouldn't have been able to resist. Your foot in my ass would surely have made you seem less "cute" in retrospect though. LOL.
But luckily for me, even had you lived even longer, I probably never would have travelled to New York or wherever else your "circles" were. I'm not much of a traveller. Well, I guess I'll end this little tribute with my wish that wherever you have travelled to in the great unknown you are having a great time - with no more petty inconveniences. Maybe you're also having fun catching up with other famous newspeople like, for instance, that other late, great -- Walter Cronkite.
Carmen

P.S. I just noticed when I posted this (before this edit) that the second dog is even lying on a fully tucked in sheet. LOL.

P.P.S. I almost forgot to mention that these pictures came from FB where they were posted by some of my "random" FB friends.

P.P.P.S. To belabor the point of the past several days about my posting habits re: time management - I bring your attention to the fact that this was posted a full half day before it usually has been at the last possible minute or in the case of BlogHer mere minutes later. Just before 12:00pm to be exact. Yay Carmen. The start of a new trend? I sure hope so.