Are You There Playlist? It's Me, Carmen 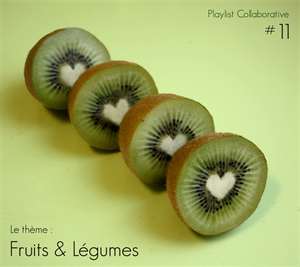 You're probably wondering what this picture, found on Yahoo Images via http://www.lechoix.fr/, has to do with the music sharing. Well, I found it (albeit on page eight) when searching for a picture using the keyword Playlist. Look closely and it seems to be the cover for a playlist compilation.
What I loved about it (other than the fact that there was a dearth of good pictures under the term playlist) was that if you look into the heart of the kiwi (literally) you'll see that they photoshopped a heart into the kiwi. LOL.
So, credit goes to Judy Blume for the inspiration for my title. Playlist has abandoned me. More so than I first thought. But not as much as it could have it turns out, so I guess that's something to be grateful for. You see, this post all started from a conversation I had with one of my blog followers who came from my list of FB "randoms"﻿.
I think I asked her if she had seen my blog lately since I had started adding pictures. If I'm correct (because this conversation took place a week or two ago) she said no but ended up following my link that I FB'ed her to quick check it and she complemented me on the music on my blog. I was caught completely off guard as my playlist has been deactivated (in Canada at least) for 6 months or more.
Turns out it must only have been in Canada though because she said she got music. I guess that means I'm vindicated in keeping the player at the bottom of my blog in case any thing were ever to change with the rules. I mean after all, the rules changed once because initially it played in Canada too. I mostly kept it on though so that people (including myself) could see the songs I picked as they still showed up but didn't play.
Anyway, back to my assertion that playlist abandoned me more than I thought but less than it could have. By that I mean since my friend/follower can still hear my songs outside of Canada/in the U.S.& or whereever else they have hammered out a licensing agreement I have been abandoned less. The abandoned more comes from me trying to sign in and finding I can't even get a lost password notification to my e-mail.
Oh well, at least somewhere in this world (likely only the continential U.S.) there are still  people who get the advantage of knowing that that marvelous 80's novelty hit "She Blinded Me With Science" is #1 on my list of songs that I wanted people to hear and moreover know that I actually admitted to liking. LOL. When I told someone else on FB that when I first put up my playlist, I could just hear them cringe over the internet. LOL.
As for what's new here in Carmen World today, my nephew Larry and my great-niece Grace stopped by. Larry had been planning for quite a while now to fix my combination vcr/dvd player that I bought two Christmas' ago and couldn't use because it needed a connector piece since my still incredibly good tv (I love my tv!) is older than it seems and didn't have a third connector. He came over and had it done in about 5 minutes! Awesome job. Thanks Larry.
Now I guess that means I start watching the 100 or so movies I bought when Blockbuster Video was going out of business. Yes. You heard me right. A hundred or so. I bought about 20+ movies when they went to 70% off of the regular price of $6.99-$9.99. Then I bought another 60+ movies (!) when they were going for 10 for $10 on the last day or two. That should keep me busy throughout the winter.
Carmen
Posted by CarmenT at 7:48 PM