The following is a two item series of pictures that show cats being, well, sneaky. 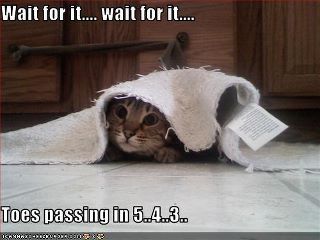 This first picture is the cute version of sneaky.
﻿ 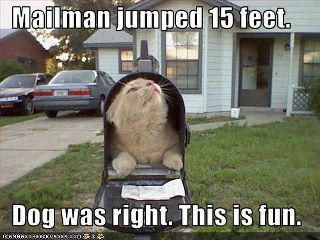 The second picture is just downright bad sneaky. Bad Kitty. LOL.
﻿
While I like both of course (after all I did save them), the second one is more my style. I know, I know. Bad Carmen. LOL. Both pictures are via Facebook. Each was originally posted to me by a different "random" FB friend of mine. I have to say I could spend all day saving cute, funny, ridiculous, etc., etc., etc. pictures from my Facebook feed.
In fact, that is what caused me to cut it so close in posting my daily NaBloPoMo post yesterday - with only a minute or two to spare and two to three minutes late on BlogHer which is the hosting site for NaBloPoMo. I consider myself to still be in the running because this is my regular blog and the BlogHer post was just a re-posting.
It still kinda bugs me that I couldn't squeak the second one in under the wire. Now it looks like, and on that site I guess technically is, no Nov. 2nd post and two Nov. 3 posts when I copy this one to the site. You'd think I learned my lesson. Maybe a little. As I type these words it is just after 11:25pm. So I have a bit of time. A bit. Still cutting close. Way too close. But not as bad.
Anyway, like I said yesterday, I think I am going to try including pictures every day. If I don't want to run out or low and have to do the all-day picture searching and then the last minute posting I better plan on doing single picture posts some days. The only thing is I like the double duty ones too because I think they tell a story in a "bookmarked" way. It's like it shows I've tried harder. Made a connection.
I guess a little bit of both would be the solution to having my cake and eating it too. Speaking of which, I've always thought that saying was ridiculous. What good is having your cake if you don't eat it too. Quite a while back I came up with what I think should be the amended, more sensible version of that saying. Here goes... "You can't have your cake and your pie too". But I'm digressing. And running out of time.
So I'll end this post by saying that I hope you have been enjoying the picture posts and will continue to. I also hope now that I have committed to NaBloPoMo and will be blogging every day for at least the month of November that those of you that have followed me in the past and came back and those of you who may have just found me will stick with me. I also hope that my new dedication and the pictures make it as fun as I think it will be.
Carmen
P.S. It is now 11:51. ^*%#. Gotta go. See you tomorrow.
The C.A.T.
Posted by CarmenT at 11:43 PM