Today I have three pictures for you. A pair and a spare so to speak. Except the spare is the lead picture. 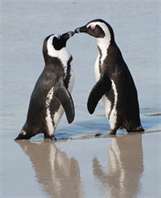 ﻿This picture comes via Yahoo Images from http://edgeboston.com/ which is a gay men's e-zine site.
It is appropriate that the place the picture originated or at least came from last was a gay site because that is exactly what I am going to talk about now.
﻿For those of you who haven't been keeping up with the news (tv, print, internet) in the last week or two, heres the story. It seems that the a Canadian Zoo - the Toronto Zoo in fact, is going to split up a pair of seemingly gay Africian penquins named Buddy and Pedro. They claim, and it seems from reading a rather complete article on the website  http://www.canada.com/ , it is to ensure the survival of the species. According to that article, penquins used to number an estimated just under a quarter of a million wild Africian penquins as late as the 1990's. Now, the numbers have nosedived to more like just over 50,000.

So Buddy, 20 and Pedro, 10 (gay human men are often said to partner up with others of quite different ages so I thought that that age difference here with the gay male penquins was ironic, if that is the right word, and just very, very funny), need to be split up. At least it seems for the short term.

The gay Canadian penquins are not the first gay penquins either. It seems that there were some at the Central Park Zoo in New York City. The Manhattan zoo's penquins were named Roy and Silo (ages unknown - lol) and they 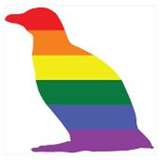 This is of course the Rainbow Love part of the title.

This being the Mad Scary part. Oh, and remember if penquins are mad scary and gay people can be mad scary then just think about what you get when you combine the two.﻿
Carmen
Posted by CarmenT at 11:34 PM